The City of Mission is nestled on a southern coastal mountain slope, overlooking the lush valley of the mighty Fraser River. Founded in 1892, Mission, BC was originally inhabited by the Stó:lō First Nations people, and today this rapidly growing and dynamic centre is home to a population of some 38,000 residents.

Ideally situated, Mission is just a 15-minute drive from the US border, and approximately 70 kilometres east of the City of Vancouver.  Mission is surrounded by the incredible beauty of mountainous vistas and natural forest settings. Our climate is warm in the summer and mild and wet in the winter. Flowers bloom most of the year, as the area is naturally hospitable to a wide variety or plant life and vegetation. Topographically, Mission enjoys an immense variation of hillsides and gullies which maintain natural neighbourhood enclosures, spectacular views, and a sense of permanence.

Mission has a unique and colourful  history. It is the site of Canada’s first train robbery, B.C.’s first rail link to the United States, one of the earliest Hydroelectric dams and Fraser River bridges, and is home to the oldest known First Nations’ archaeological site in British Columbia.

The municipality has an open and welcoming attitude to its citizens and businesses, new residents, investors and visitors alike. Come and see for yourself why Mission is “the Jewel in the Valley”.

Mission’s history goes back to the first inhabitants of the region, the Sto:lo, or the People of the River.  People travelling the Fraser River in huge cargo canoes met in the centre of the great river valley where the Sto:lo traded wind-dried salmon, fruits and other goods with clans from the coast and the interior of British Columbia.

In the mid 1880’s, establishment of railway facilities further focused attention on Mission and facilitated a period of rapid urban growth which included the “Great Land Sale” of 1891.  Mission’s considerable lake and forest resources also enabled establishment of hydro electric operations and the creation of a prosperous logging industry.

Mission has retained its keen sense of history which is evident in the heritage buildings of its historic downtown core and hinterland.  More recent additions to the historic mosaic include Westminster Abbey, Hatzic Rock and the Fraser River Heritage Park.  Planned rejuvenation of the Fraser River Waterfront will ensure that history will continue to be an important part of Mission’s future.

Today, Mission is a growing community of over 38,000 residents nestled in the Coast Mountains beside the Fraser River, 70 kms from downtown Vancouver.  Residents enjoy Mission’s rich history and strong sense of community, while also retaining the benefit of ready access to the greater Vancouver area.

There are over 5,000 people in Mission today who were not born in Canada. We are a diverse community.
The diversity of our backgrounds means we all bring unique experiences and perspectives to our common belief and shared commitment to fostering a healthy and welcoming community. We share the belief that everyone deserves opportunities to thrive. Together, we can work to make sure that everyone truly is welcome here.

More historical information can be found on these websites: 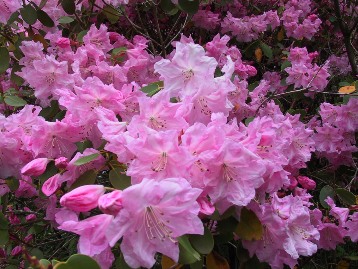 The Caitlin Rhododendron is a beautiful pink scented rhododendron that was created by Dr. Jim Marcellus through the crossing of the Fortune and Hummingbird Rhododendrons, and named after his granddaughter. It was presented to council by Communities in Bloom on April 2, 2007.

The Caitlin Rhododendron is registered with the Royal Horticultural Society.  It is a large shrub, very dense and its leaves are quite small, oval in shape and the flowers are a stunning, brilliant pink colour. Perhaps its outstanding characteristic is its lovely scent and when the plant is in full bloom, around the middle of April, the blooms cover the whole shrub from the base to the top. It takes the plant-lover’s breath away with its beauty.

A special thank you to the Fraser South Rhododendron Society for allowing us to use this spectacular picture of the Caitlin Rhododendron taken by the late Dr. Margaret ‘Mike’ Trembath.

The core of the design, the shield of arms, is a new symbol in heraldry, the Mission cross, named for the City and symbolizing three ideas: the City as crossroads, the historic past and foundation of the community and Mission’s forest wealth, the City’s wealth drawn from agriculture, and natural heritage.  On the Mission cross is placed the form of cross favored by the Oblate Fathers, whose school marked the beginnings of the City in modern times.  The two crosses together represent the amalgamation of the City and the District into one community in 1969.

Crest (above the Shield)

The helmet and mantling (the decorative cloth in the City’s armorial colours of heraldic silver and green) are the two traditional components of this and most coats of arms.  Today they can symbolize, in the same spirit as the knight defending his lands, the determination of citizens to safeguard and strengthen their community.  A golden Sto:lo canoe, honouring the First People of the District and the ongoing importance of the Fraser for transportation and fishing, supports a sprig of salmonberry.  This vigorous plant was important in the diet of the First Peoples and foreshadows the later importance of various berry crops nearer the present day.

The grassy compartment on which the deer stand is a symbol for the rich agricultural lands by the Fraser, the site of the earliest part of the community.  The multicultural character of the City’s people is represented by the linked dogwood, the provincial flower, the salmonberry and the strawberry, the latter also referring to one of the City’s outstanding early agricultural industries.  The stag and the doe symbolize the men and women who have built and will build Mission; pioneers, present day citizens and future residents.  The animals also represent the rich natural heritage of the City highlands.  On the pendant of the stag’s collar is a gold fir tree, symbol of the ongoing importance of the forest industry and the recreational value of the forest.  The doe’s collar pendant features a steam locomotive wheel, recalling Mission’s industrial heritage and, specifically, the part played by the railway in the City’s development.  The doe carries the City’s flag, referring to the citizen’s responsibility to uphold the community’s honour and contribute to its well being.

THE FUTURE OUR MISSION is a call to the community to look ahead to the further development of Mission.

Composed, according to classic heraldic laws, of the shield of arms arranged to fit a horizontal shape.

Presented to the City of Mission by the Mission Weavers and Spinners Guild October 18, 1999, the tartan was created to reflect the diversity of natural and industrial history of the Mission area. 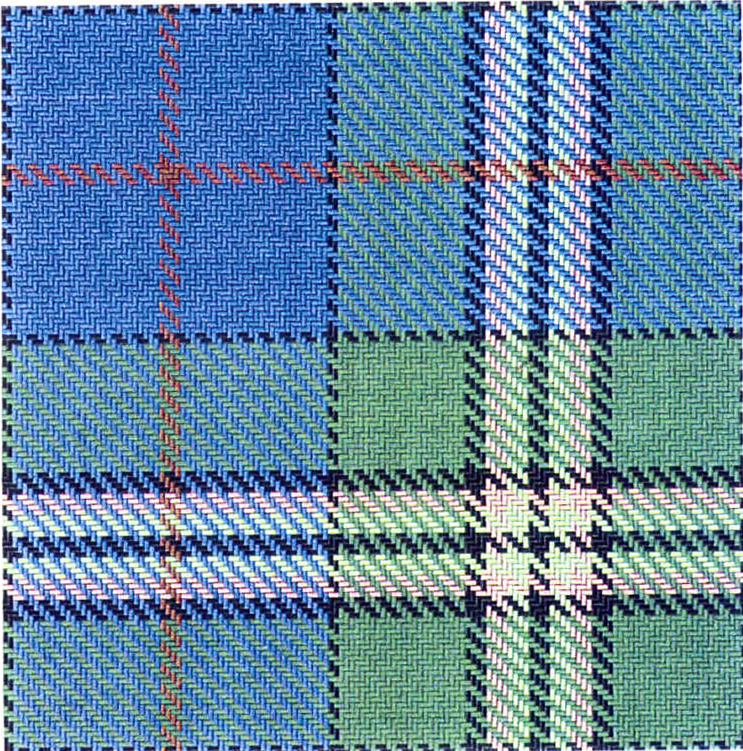 The tartan is registered in Scotland, and the City of Mission has accepted it as the Official Tartan.

Each colour is representative of one or more of Mission’s unique characteristics.