Mission is seeking elector approval to reclassify as a City.

This process is being approached through the Alternative Approve Process.

This means that electors opposed to the reclassification have until Friday, October 11, 2019 to sign and return an official response form opposing the initiative. If more than 10% of electors sign and submit a form in opposition the reclassification will not proceed unless approval is obtained through assent voting – meaning a referendum.

Only those opposed to the reclassification need to complete a response form.

Response forms are available at Municipal Hall, the Mission Leisure Centre, and the Welton Common offices in Downtown Mission. 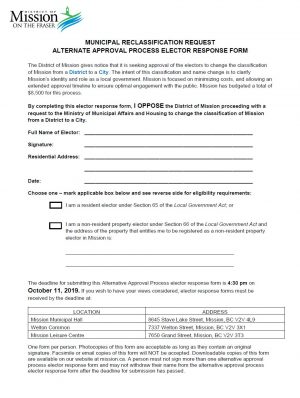 Why Reclassify as a City?

Council has decided to seek a reclassification for many reasons.

At nearly 40,000 residents Mission has long since passed the 5,000 person threshold for being a city.

The reclassification also supports economic development efforts. Council is focused on bold economic development, and a “City” classification will remove one of the barriers to marketing our community to potential businesses, investors, and professionals looking to relocate to the lower mainland. “District” municipalities are usually seen as rural areas, without the infrastructure or populations that can support business and industry.

Reclassifying as a city also creates an excellent opportunity to work together as a community to advance a strong shared-vision for our municipality building on the strength of our Official Community Plan as we move forward with partners on projects like the continued revitalization of Downtown Mission, the revitalization of the Mission Waterfront, and community planning overall.

Many historical references to Mission City remain today, including on the iconic Mission Post Office in Downtown Mission and as the name for our West Coast Express station.

The Mission Museum has a detailed timeline of noteworthy events, and is a great place to visit for a deeper look at the history of the community and region we call home.

How much will this cost?

The Alternative Approval Process where the municipality is seeking approval from electors is budgeted at up to $8,500, funded from existing reserves.

If the municipality receives approval (meaning less than 10% of eligible electors respond in opposition) then the municipality can apply to the Ministry of Municipal Affairs and Housing to change the classification to a City.

It includes significant community consultation and engagement to build on the vision set out in our Official Community Plan, rebranding based on that vision to support more effective economic and community development, and developing a new website to better serve the community and improve communications.

That effort is budgeted at up to $167,000, split over two fiscal years, and has not yet been approved by Council. While it is not dependent on the reclassification it is proposed as part of Council’s 2018-2022 Strategic plan, and would provide an opportunity to bring the community and stakeholders together as partners in developing a brand that truly represents what makes Mission unique.

Who is eligible to respond?

To be qualified to submit an elector response form on this reclassification request, you must:

PLEASE NOTE: One form per person. Photocopies of this form are acceptable as long as they contain an original signature.

If you have questions regarding your eligibility or the Alternative Approval Process, please contact the municipality by telephone at 604-820-3700 or by e-mail at info@mission.ca.

How do I respond?

Response forms are available for pickup and drop-off at Municipal Hall, the Mission Leisure Centre, and the Welton Common offices in Downtown Mission.

You can also download a copy of the form here and print at home. Completed forms must be received by the municipality by 4:30 pm on Friday, October 11, 2019 to be counted.

All forms must have an original signature. We are not able to accept responses by email or fax.

Will this change taxes?

No. Reclassifying as a City does not create new or higher taxes. It is simply a change in classification that more accurately reflects Mission’s status as a growing municipality in the region.

Does this pull outlying areas into our tax pool?

No. This reclassification does not change Mission’s boundaries or taxation powers.

We do collect some taxes on behalf of other taxation authorities like the Province and the Regional District, however those authorities set their own tax rates and we do not keep the funds collected on their behalf. You can read more about which taxes and fees are listed on your tax notice in our finance section on municipal taxes.

Does this change mean the city and developers can build larger buildings?

No. This change doesn’t impact zoning, the bylaws regulating building and development, nor building or developing on land within the Agricultural Land Reserve.

The notice below is being published weekly in the Mission Record during the Alternative Approval Process, starting Friday, August 23, 2019, ending Friday, October 4, 2019.

The District of Mission gives notice that it is seeking approval of the electors to change the classification of Mission from a District to a City. The intent of this classification and name change is to clarify Mission’s identity and role as a local government. Mission is allowing an extended approval timeline to ensure optimal engagement with the public and has budgeted up to $8,500 for this process.

By statute, to be considered a City, a municipality must have a population of over 5,000. The current population of Mission exceeds 38,800. In an effort to affirm Mission’s identity as a growing municipality and set ourselves apart from other district authorities, Mission is seeking to change its classification from a District to a City and accordingly update its name by Letters Patent to the “City of Mission”.

Council may apply to the Ministry of Municipal Affairs and Housing to change the classification of Mission from a District to a City unless at least 10% of the electors of the entire municipality of the District of Mission sign elector response forms opposing this initiative and submit them to the District of Mission by the deadline of 4:30 pm on October 11, 2019. If 10% of the electors sign and submit elector response forms by the deadline, the reclassification may not proceed until such a time as elector approval is obtained by assent voting.

The only persons entitled to sign forms are electors (resident electors and non-resident property electors) of Mission.

The District of Mission estimates that 2,873 is the minimum number of electors who must submit signed elector response forms in order to prevent Council from applying for a change of classification from a District to a City without the assent of the electors.

Elector responses must be submitted using the form provided by the municipality. Forms are available on Mission’s website at mission.ca and are available by request at the following locations:

Completed forms can be dropped-off at any of the above locations during regular business hours.

Response Forms must be received by the municipality by 4:30 pm on October 11, 2019 to be counted as part of this process.

Copies of staff reports related to this matter are available for public inspection at Municipal Hall during regular business hours, as well as online at mission.ca. You can also contact the Corporate Officer at 604-820-3700 or email info@mission.ca.